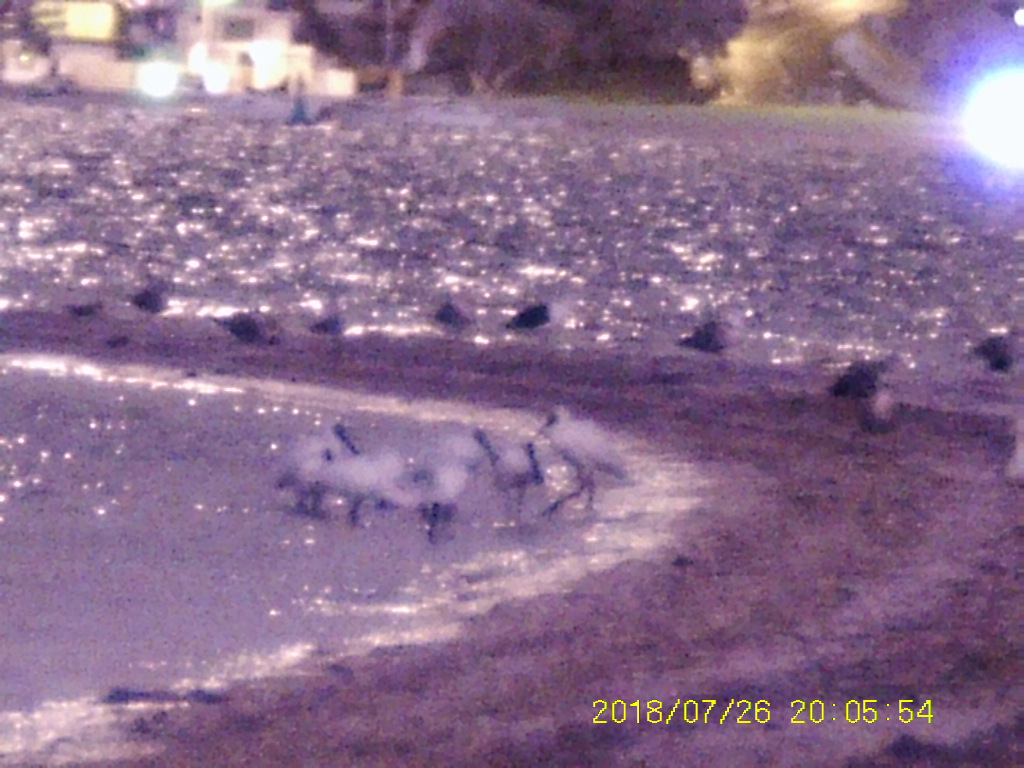 I have been counting a lot of birds lately trying to build a solid picture of how the shorebirds use the Tāmaki Estuary. In addition to regular wader counts I decided to try and also count them at night as they might use the roosting areas differently. After testing various devices including long exposure photography Pieter and I decided on expensive gear to do the survey, I bought a Luna Optics LN-DM50-HRSD Digital Night Vision Monocular (example image above) and Pieter purchased a Pulsar Helion Thermal Imaging Handheld XP38. Using these devices helped us count the birds without disturbing them which was quite important to us. Details of the trial here Tamaki Estuary shorebird survey – Wildlands.

The feeding observations were really interesting. Tho in regards to extra light – it was disappointing not to find shorebirds at Mt Wellington War Memorial Reserve where I found banded dotterel and flocks of SIPO at night last year. The reserve now has large lights for playing sports in the dark.

I think the trial study has given us enough data to understand how the shorebirds use the estuary at night. More detail would be interesting but is unlikely to affect future management decisions. Here is the Raw data. I plan to keep a better eye on the Pakuranga Sailing Club and include the data in a report to Council on roosting in the Tāmaki Estuary.

Access to viewing points was limited because we wanted to do the survey without disturbing the birds. All the waders identified were more easily scared at night with the exception of the mixed flock at the Pakuranga Sailing Club that was unusually calm in our presence (both day and night). Day counts followed the limited routes of the night counts for consistency, however a few birds were often seen during the day that would have been hard to see at night from the same vantage point.

No variations in flock shape were observed between day and night. The main thing that correlated with flock shape was if the SIPO were feeding. The SIPO flock spread out over 100m in diameter when feeding at Point England both on the sportsfeilds (at night) and the paddocks (during the day). The pied stilts were always grouped closely together.

I think the roosting patterns look like waders are primarily avoiding disturbance. Wide open spaces with no obstructions or light were preferred… maybe close to the water too – especially for the smaller waders? Seaside park a good example – I was surprised to see SIPO there at night. The lack of birds at Mt Wellington both Day and Night in 2018 vs 2017 is odd. Maybe the addition of the lights has also reduced the sites daytime roosting function.

I totalled the counts for SIPO and Stilts to see if there are variations in the total day vs night numbers. We are short 22.5% on SIPO, I feel like we would not have been that far off and some birds are heading elsewhere to roost, it’s not a huge number tho. I am sure we missed some birds tho, for example during the day the NNZD at Point England are so much easier to spot than at night.