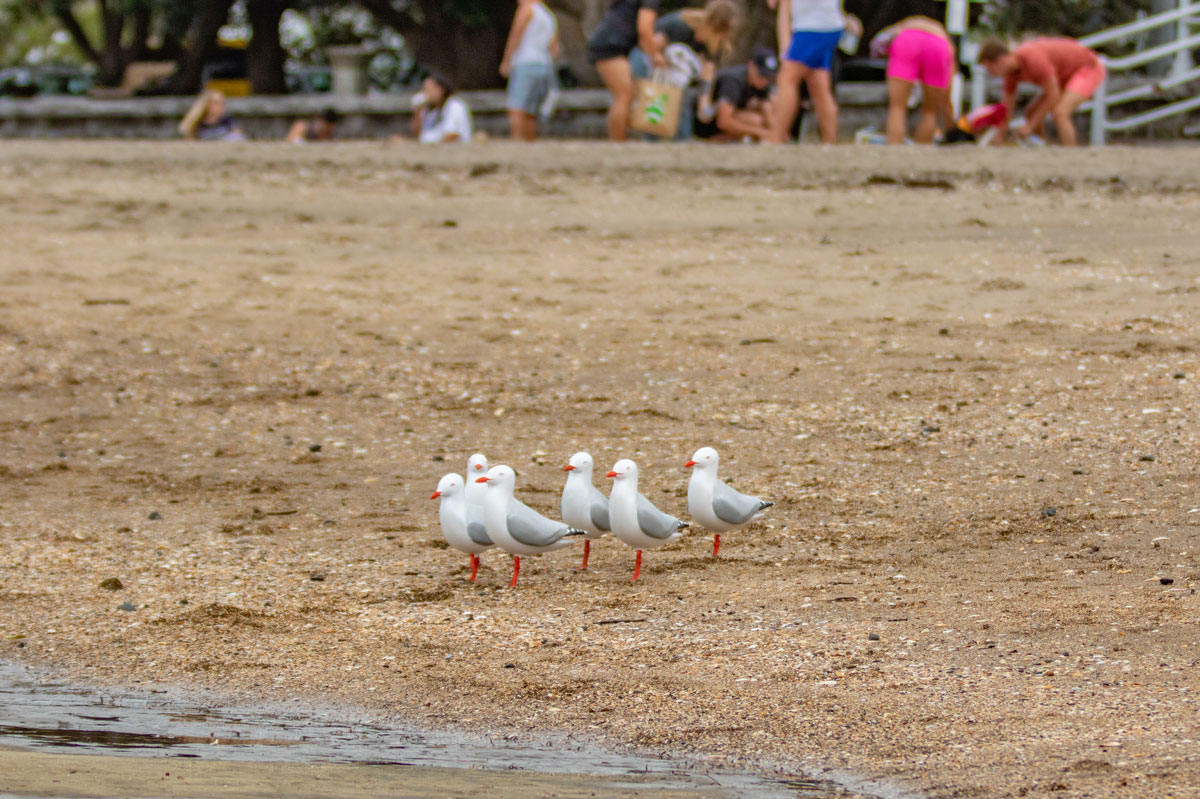 I was recently asked to quickly create some red-billed gull decoys. I joked they might be better of using a decoy picnicker but the reality is this is another native species that is in real trouble (conservation status declining). I posed the decoys with their tails up but with legs so they could be used standing or sitting if they need extra anchorage.

Unfortunately these decoys were snapped off at the leg, we are not sure how, as it would involve a lot of force. So…

A great article on the Wynyard gull colony project has been published here. Ohhhh and another article in the Guardian! 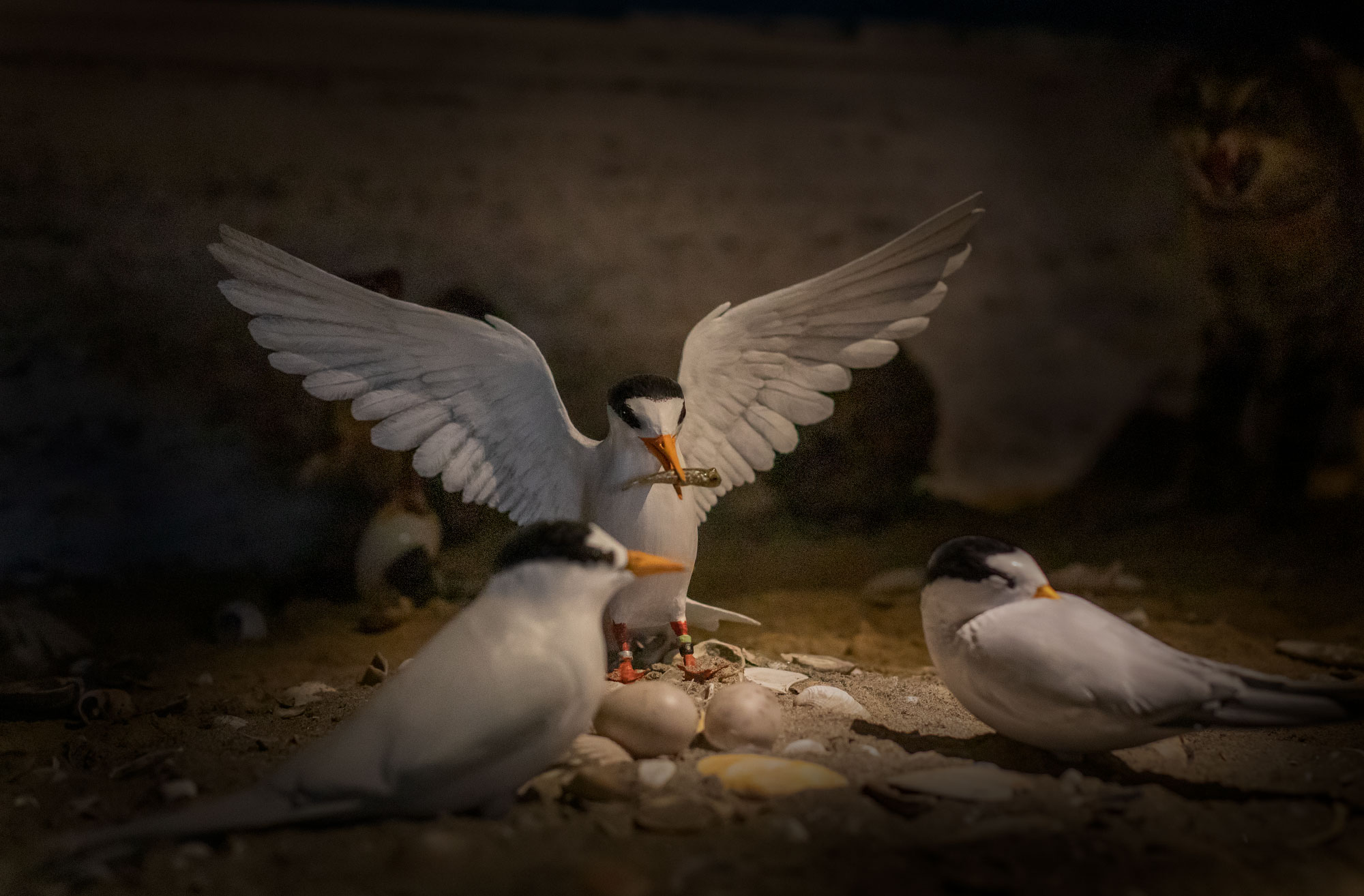 This was my most challenging project for 2018. After reading about the New Zealand Fairy Tern decoys I was making, the Mangawhai Museum approached me to make them some replicas. As there are only 40 of these birds left in the world they were never going to be able to get a taxidermy one for an exhibition.

I was very ambitious and decided to create a feeding scene where the male is landing with a fish in his bill. This was very challenging and I really pushed my printer to the limits and discovered a few new tricks in the process. I think this kind of model making has advantages over taxidermy where the models can be designed to exhibit a wide range of behaviours. It will be interesting to hear how the public react. 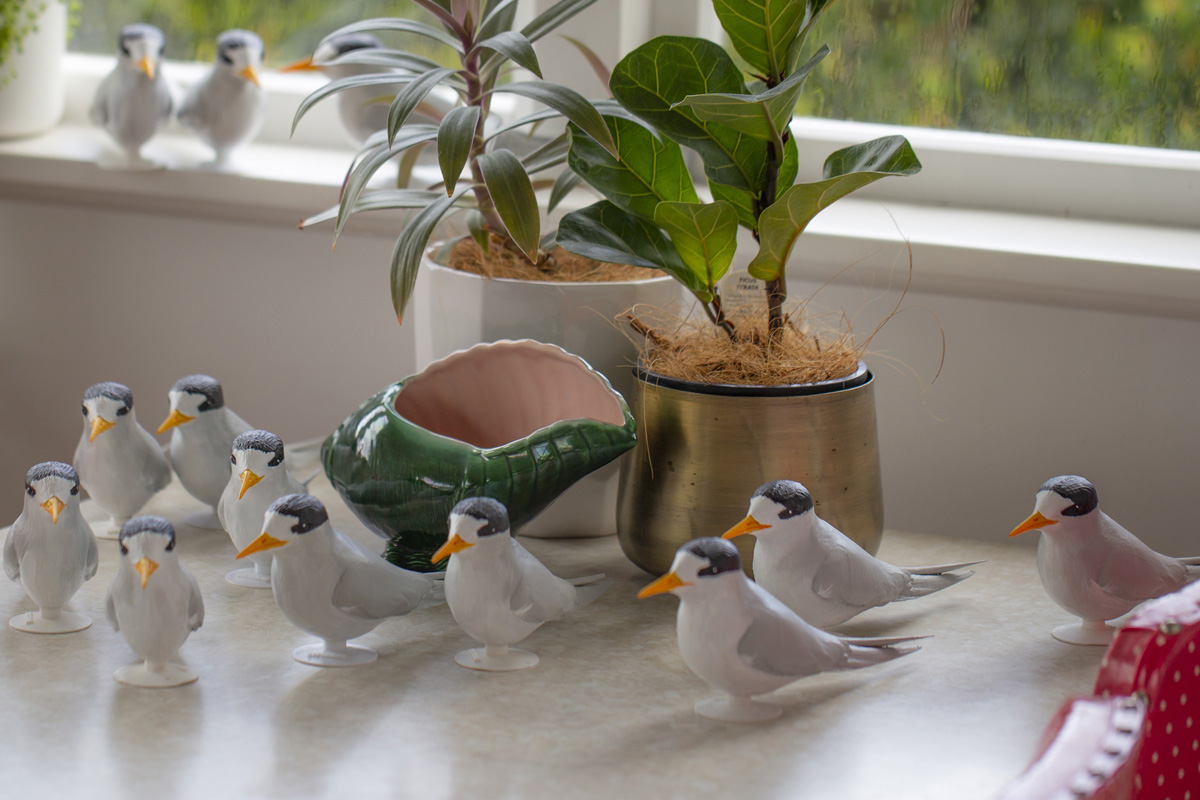 After talking about my New Zealand fairy tern decoys I was approached by Australian conservationists about making decoys to attract Australian fairy tern. Although they are the same species they have brighter beaks and shorter eye patches so I modified the paint job a bit. The biggest difference between the sub-species seems to be that they flock together to nest. I imagine this will make the decoys more effective for this subspecies.

I lowered the design so it looks more like they are incubating, hopefully they will still turn into the wind ok. Photos below of the birds without spikes above and below. 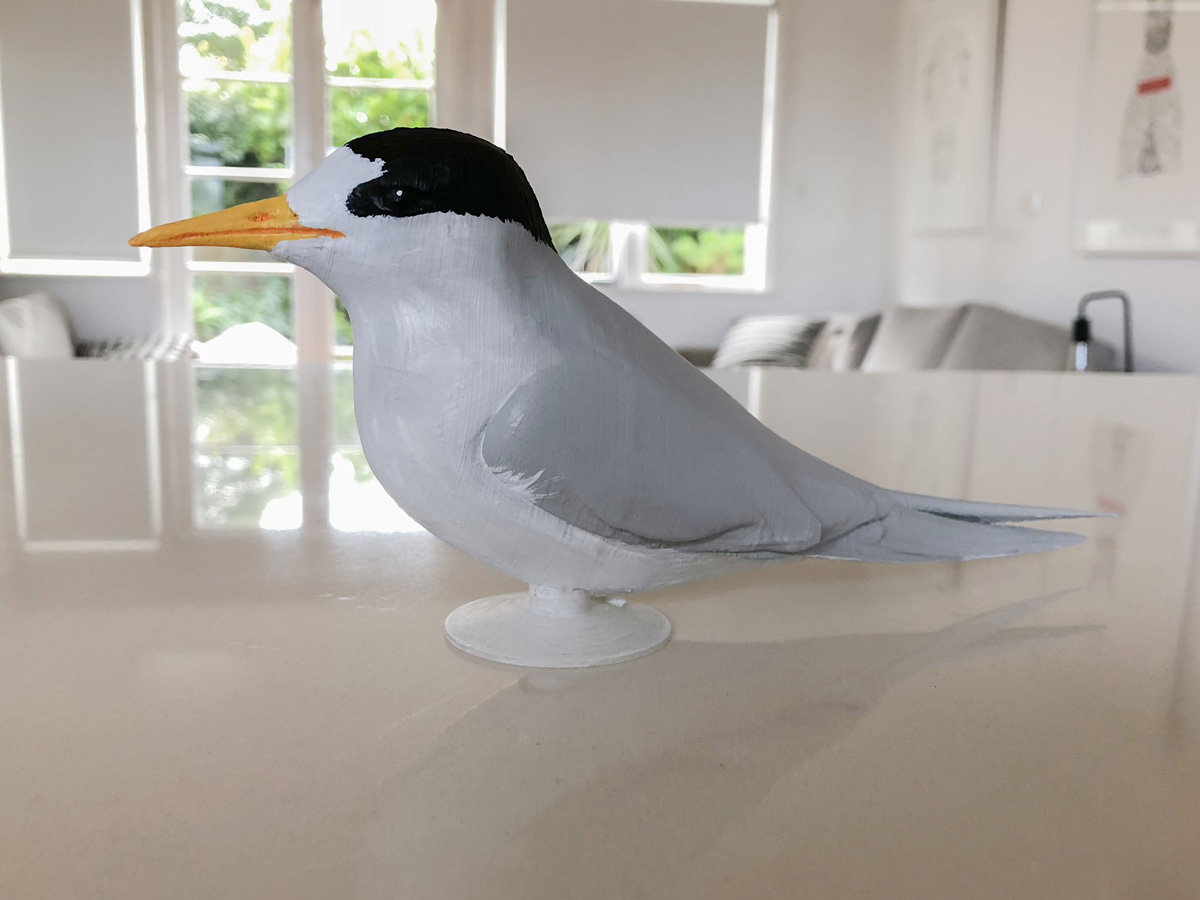 We’ve had some problems with these decoys, the black painted parts get so hot in Western Australia that the plastic melts leaving the decoys with flat hair cuts! The glass transition temperature for PLA is around 60° C. I tried covering some PLA with two part epoxy resin then warmed it up to try and simulate the issue. The epoxy worked well holding the form in shape even when I got it so hot the surface burned. However it did deform a little with bubbles and spilts, this might work as a patch up job but its not ideal, other ideas:

I really like using PLA because it’s biodegradable and from a renewable resource but in this situation it just might not be up to the challenge. Common filament options are: ABS (won’t print with as good detail), PET (not glue-able) or Nylon (which has a lower glass temperature). I could print with plastic that has better thermal resistance like Polycarbonate, or print using dissolvable supports and no glue with something like PET but I would need a much more expensive printer. Unfortunately I think heat resistant decoys are going to be less environmentally friendly and either expensive or labour intensive 🙁

I have made three new decoys to test, all are glued using two part epoxy.

The numbers 1,2 & 3 are carved into the newly designed peg which is shorter but more heavy duty. The increased infill makes all of them heavier, this should help keep them down when the sand moves, if that does not work the painted legs should look more natural. The overall design of this decoy is a little more robust, it has it’s head ‘terned’ a little to help distinguish it from the other decoys I have made.

Update Dec 2019
These decoys were deployed from 3 Nov-20 December on Garden Island. They did not attract the target flock which nested elsewhere. With three of the days being in excess of 37 degrees the decoys got tested pretty well and show no signs of melting or splitting. They have been deployed in the researchers garden for further testing 😀

Decoy 2 developed a minor crack in the join, it was the weakest decoy with half as much infill for internal strength. No changes to the other two. 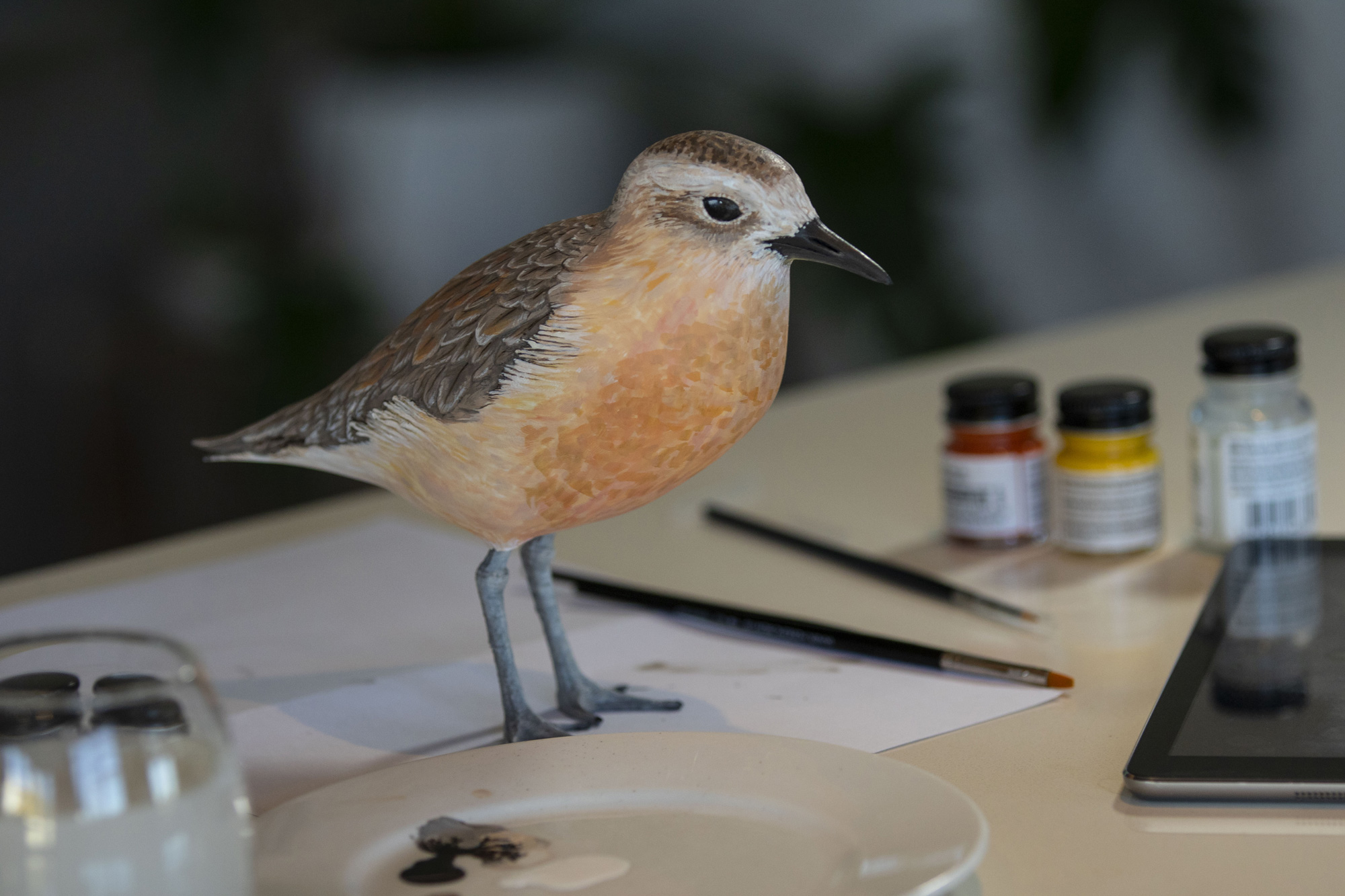 I have been working with Northern New Zealand dotterel (NNZD) for nearly five years now. I know this bird really well but I had to look a lot closer when I decided to try and make a decoy. Southern New Zealand dotterel (SNZD) are in big trouble with a small and declining population. I decided to see if a decoy would work to help capture SNZD which have been difficult to catch outside of breeding season. A well placed decoy could help position one or more birds near a leg-hold noose-mat trap or in position for a canon net.

I put the decoy about 20m away from some NNZD at Point England and on both occasions each NNZD walked over to the decoy (with head bobs) in less than two minutes. They stayed just less than 1M away for two minutes before I removed the decoy.

I need to fix the beak, refine the plumage and add spikes to the removable legs but so far it looks promising.

UPDATE: I have made a small flock of them. They are not quite right but should do the job. 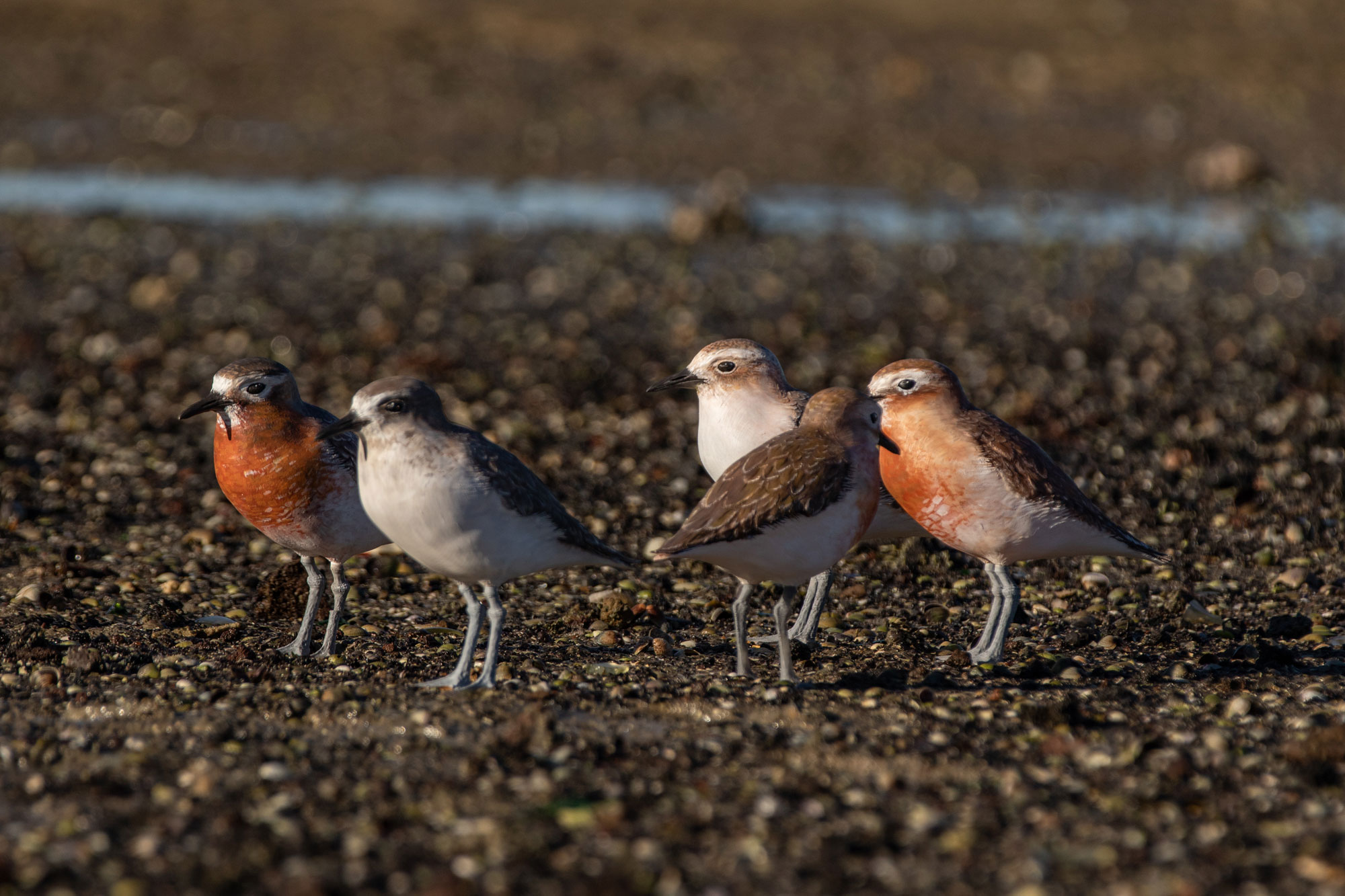 I have been 3d printing New Zealand fairy tern decoys. It’s been a great challenge and a very worthwhile project. With help I have documented the why’s and hows on the Gulf Journal.