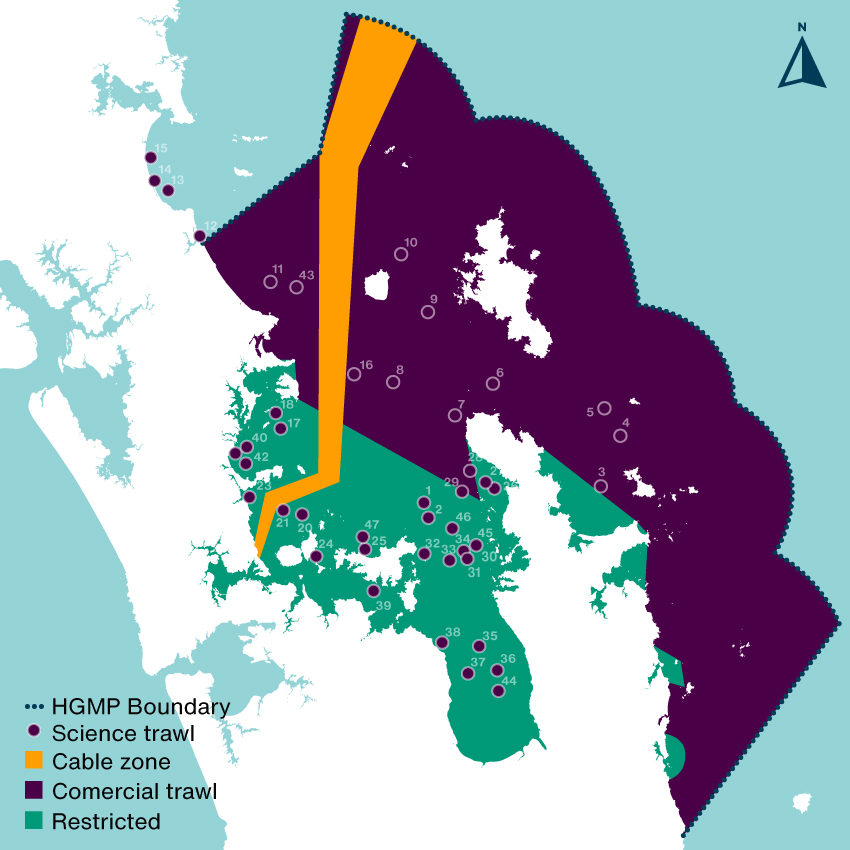 The most barbaric way to answer this question would be to drag a giant net around and count what you kill but you’re not allowed to do that in the inner Gulf where trawling is restricted… unless you have a research permit from Fisheries New Zealand (FNZ). Despite calls to stop bottom trawling in the Hauraki Gulf Marine Park (HGMP) (Sea Change 2017 & Hauraki Gulf Forum 2021) FNZ have started doing these trawls regularly, they justify the trawls are required to gather information on the Tāmure / Snapper population. They haven’t done research trawls like this since the Hauraki Gulf Marine Park Act came into effect in the year 2000 (NIWA 2019). In areas where trawling is restricted (c25% of the HGMP), the study was like bulldozing a regenerating forest to count the birds. A disgraceful act on private land let alone a national park.

How much seafloor was scraped?

The nets are massive, wider than a rugby field. FNZ were just interested in killing demersal fish (goundfish), they dragged theses massive nets along the seafloor smashing down anything that lives there and creating giant sediment plumes that contribute to climate change. In areas that have been closed to trawling for decades there are patches of horse mussel beds, sponge gardens and tubeworm mounds and other habitats regenerating after decades of abuse from heavy machinery. You can read about them in the report (NZFAR 2021) where they are described as ‘foul’ a horrible word which suggests there is something ugly about these beautiful benthic epifauna that are working hard (day and night) to clean up our pollution (they are nearly all filter feeding animals). In defense of FNZ they did try and avoid areas with a lot of immobile sea life but they failed so badly that they had to stop trawling on several occasions, this shows that a) the seafloor is recovering and b) echosound is no good for measuring trawling impact on benthic life.

Although the percent of trawled seafloor was small (less than 1% of the study area) the areas bottom trawled were huge:

A total of 615 rugby fields, 381 of those fields had not been physically impacted by trawling for decades. The trawls were about 1/10th as long as a commercial trawl which may impact 1–10 km2 (MacDiarmid 2012). This is largely due to the horrific sediment plumes they create, especially on mud which most of the trawls in restricted areas were. This means the total trawl distance of 53.35km could have impacted up to 40km2 (6,349 rugby fields) of seafloor – choking animals and smothering plants.

So where were all the fish?

The average catch weight per trawling station in restricted areas was 500% higher than areas where bottom trawling is not restricted (1,033kgs vs only 171kgs). That’s a huge difference, the commercial fishers pulling up the nets must have been blown away with the haul! There was no significant difference in the size of the trawls but there was a big difference in depth. Trawls in trawling restricted areas averaged about half the depth (23m) of those in regularly trawled areas (47m). So are the fish benefiting more from trawling restrictions or depth?

As you can see from Figure 1 & 2 there is no correlation between depth and catch weight (red line vs data). There could be many other factors involved (FNZ seemed to deliberately avoid trawling on sand in the inner Gulf so we can not directly compare substrates), but the 500% increase in catch weight in areas protected from trawling shows that protecting the seafloor from bottom trawling dramatically increases the amount of fish that live on the seafloor.

The survey is good news for recreational fishers who shouldn’t leave the inner Gulf to catch more Tāmure / Snapper. If you’re a fisher who wants to know where demersal fish are in the Gulf I recommend you read the report (NZFAR 2021). If you want to know which trawling station got the highest catch… I’m not telling! You will have to ask FNZ, you can send them an OIA request Official.InformationAct@mpi.govt.nz why don’t you tell them to stay out of the restricted areas and stop bottom impact fishing at the same time 😀

What happened to all the fish?

The total weight of fish (mostly Tāmure / Snapper) landed was 41,759 kilograms! 80% of the dead fish was sold for $128,449.35 which seems like a lot but with Tāmure at $20-$30 per kg at the supermarket they could have made more than one million dollars selling it direct to consumers. Of the total revenue from the two years of survey approximately 73% ($93,634.47) was absorbed in operation costs of the research vessel to process the catch. The remaining balance ($34,814.88) was returned to the Ministry of Primary Industry. That means even selling the dead fish dirt cheap the surveys make a profit for the Government. The self issued scientific permit to trawl in restricted areas is more profitable than some whaling trips the Japanese government justifies as science.

What else did they haul up?

I was surprised to see invasive species like Mediterranean fanworm (Sabella spallanzanii) turning up in the catch. They are very skinny and should fly through the nets. There must have been very dense beds in places. It was disappointing to hear from my Official Information Act request that Biosecurity New Zealand was not informed of which stations had high numbers of the Unwanted Organism. The lack of interagency communication (even with MPI) sucks but the double standard is worse. When restoring the seafloor from fishing damage the Mussel Reef Restoration Trust must notify an MPI technical officer if it accidentally releases an Unwanted Organism (a legal requirement of moving Unwanted Organisms under the Biosecurity Act 1993). Bottom trawlers however can move them around the Gulf with no regard to Biosecurity. This shows how Biosecurity NZ favours industry over community groups.

Will they do it again?

The surveys continue despite FNZ no longer having a public license to bottom trawl the HGMP. There is 84% public opposition to fishing methods that impact the seafloor (Hauraki Gulf Forum 2021). Most fisheries scientists take samples 100’s of times smaller or use baited underwater video cameras to count and measure fish. FNZ definitely don’t have a social license to trawl in restricted areas but they are ploughing on. Because I make a living doing science communication its not in my interests to criticise the research survey but I had to because I think what they are doing is wrong.