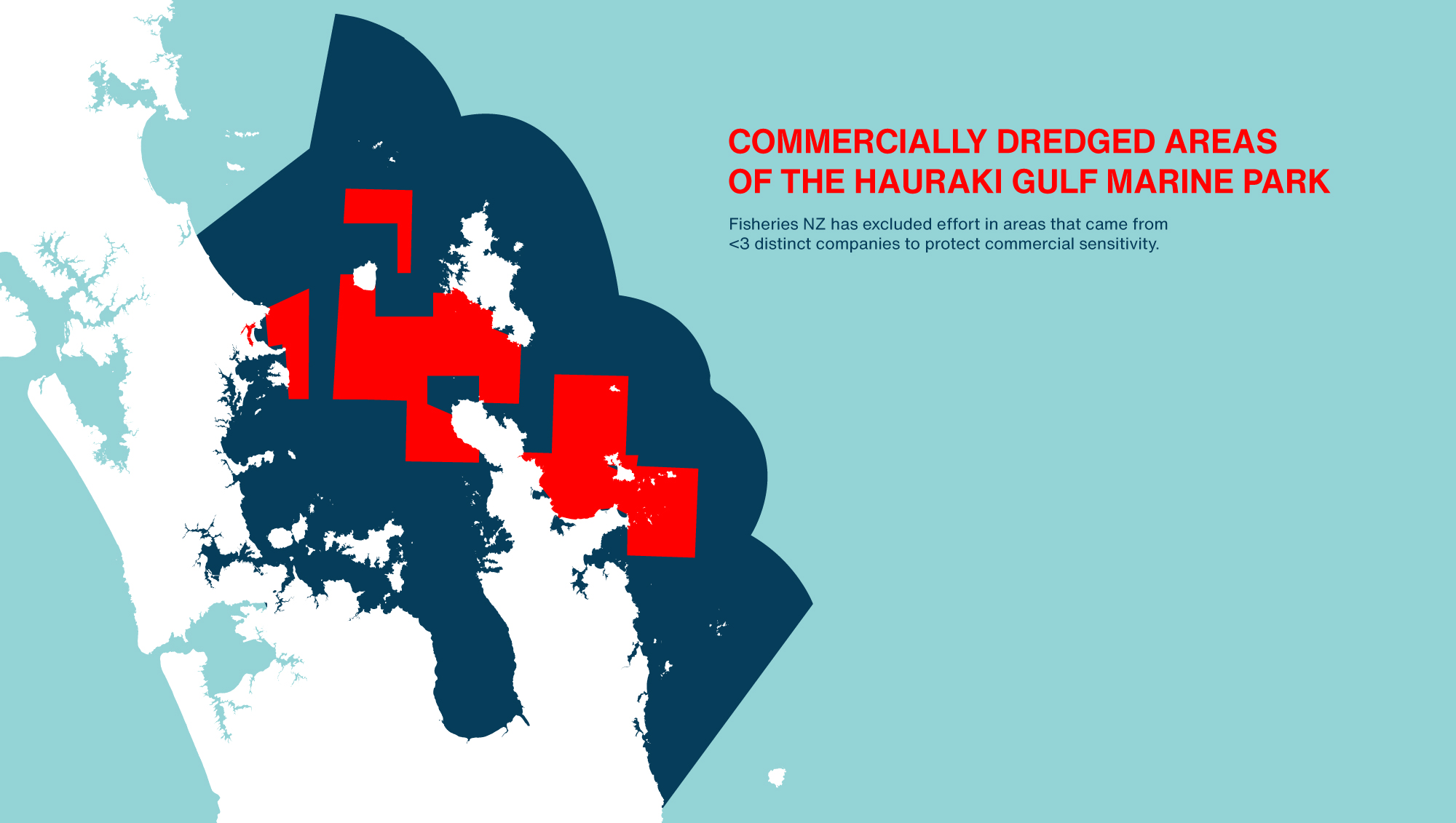 Here is a summary of my read of the plan

Commercial bottom trawling and Danish seining. The Sea Change – Tai Timu Tai Pari Marine Spatial Plan 2016 (Sea Change) recommend these fishing methods be removed from the Gulf, this is inline with the Hauraki Gulf Forums (The Forum) goals. It is disappointing to see the Government push any decision to another committee, however they have suggested ‘most’ trawling will stop which is hopeful. Currently both practices impact about 77% of the Gulf.

Commercial dredging. Sea Change and the Forum also recommend this destructive practice be removed from the Gulf. No changes here with huge heavy machines scraping ~37% of the seafloor. In 2016 current Minister of Oceans David Parker said “Fisheries New Zealand has been captured by industry” it seems that has not changed with Mr Parker now heading up the portfolio. I am hoping the areas are reduced in the Fisheries Management Plan as most of the effort (~300 tows PA) currently happens around the Mercury Island Group.

Recreational dredging. Stopping this is a huge win for the Gulf, it opens up the entire Inner Gulf for restoration and I think it should have been the headline. However I think its unlikely that recreational fishers will think this is fair given commercial dredges have much more impact on the seafloor. The Inner Gulf is much more degraded by bottom impact fishing than the Outer Gulf with over 122 years of scraping. It’s really exciting that from 2024 it can begin the long process of recovery.

Marine Protected Areas. No take marine reserves go from 0.33% to 0.575% of the Gulf. This is a significant increase, but a pathetic overall result. Experimental ‘High Protection Areas’ with customary take by permit will attempt to protect 6.2% of the Gulf. These areas will not come into effect until the end of 2024. I expect we will have to wait at least seven years before we know if they work.

Here is some detail on the Marine Protection Areas

Existing ‘No Take’ Marine Protected Areas in the Gulf:

The other 11 proposed High Protection areas are experimental in that they allow customary take by permit. They could meet the protection level required to be designated as MPAs, depending on how mana whenua choose to undertake their customary practises. They are:

The technical analysis of the proposals has assumed that these areas will be ’No Take’ but Government has decided to use special legislation to progress the ‘High Protection Areas’ rather than the Marine Reserves Act, there is no indication as to why. The areas which will be enabled through new legislation which will not be passed until 2024, this means the process which started in 2013 when completed will have taken 11 years. As the areas include customary take by permit, they are experimental. I don’t know how long we will then have to wait until we know if the experiment works or not. I am deeply concerned it’s not even close to enough protection to restore functioning ecosystems in the Gulf. The existing reserves and extensions plus the High Protection Areas only add up to 6.775% of the Gulf (excluding any seafloor protection like cable zones). The Government is putting a lot of faith in a Fisheries Management Plan that does not yet exist.

Errors (as I find them):

Page 39. “Since then, large scallop and oyster beds have largely replaced mussel beds in areas of habitat degradation.” The areas are dominated by mud, invasive species are the dominant epifauna.

Page 39. “Significantly increasing the amount of freshwater” sentence is not finished or doesn’t make sense.

The Ministerial Advisory Committee was not impressed with the first draft of the action plan, and it looks like many changes were made. However it is hard to tell what was changed as (like the action plan itself) it is very short on detail. The biggest criticism seems to be on the timings which I really agree with, Govt is moving incredibly slowly given the urgency of the problem.

The other general criticism is around resourcing. This paragraph well articulates my frustration in reading the ‘active restoration’ section of the report.

“Our major concern with this part of the strategy is a complete lack of reference to funding sources for restoration. While identifying regulatory barriers is mentioned, there is no mention of funding barriers, which are arguably just as significant. Active restoration efforts will require resources to implement and sources of funding should be identified.”

I am very pleased to see that Govt listened to one member of the MAC that questioned blanket customary take in the MPAs. I hope many iwi will support no-take in HPAs because they will want them to have maximum mauri, and only no-take MPAs are known to work – anything else is an experiment.

A lot of the rest of the criticism is around governance. I am not interested in ownership of the Gulf or the power dynamics… just environmental outcomes.

OIA response here. I have emailed the officer to ask for the survey results and a follow up meeting.

I got no response, so sent in a new OIA request for the data and survey. I then got a phone call. They are 6-8 weeks away from publishing the NIWA HGMP scallop fishery survey results (so my request for those will be declined). Aggregated Electronic Catch and Position Reporting (ER/GPR) data would be available if I provided a specific time frame and area. The data could be provided visually E.g. a heat map. I have done this.

I received a response to my OIA request (Heatmap A, Heatmap B). I have added the dredged areas together and removed the proposed HPA’s, SPA’s and CPZ’s to calculate the percent of the HGMP that will be ‘frozen’ under the Governments plan to ‘revitalise the Gulf‘. More than 20% of the Gulf will remain heavily impacted by commercial dredging with no public input into the decision.

The cost to create $774.1km2 of Marine Protection Areas in the plan (assuming they are no-take) to 11 commercial fish species was calculated to be $3,436,014. If we crudely scale up the figure for the gains to snapper / tamure alone based on this paper we get $209,710,000. Or a net gain of more than 200 million dollars! This is an incredible number, MPAs would not be adding so much money to commercial fisheries if they did not manage fish levels at such incredibly low numbers. Clearly Fisheries New Zealand should be making MPAs (at speed) all around NZ.