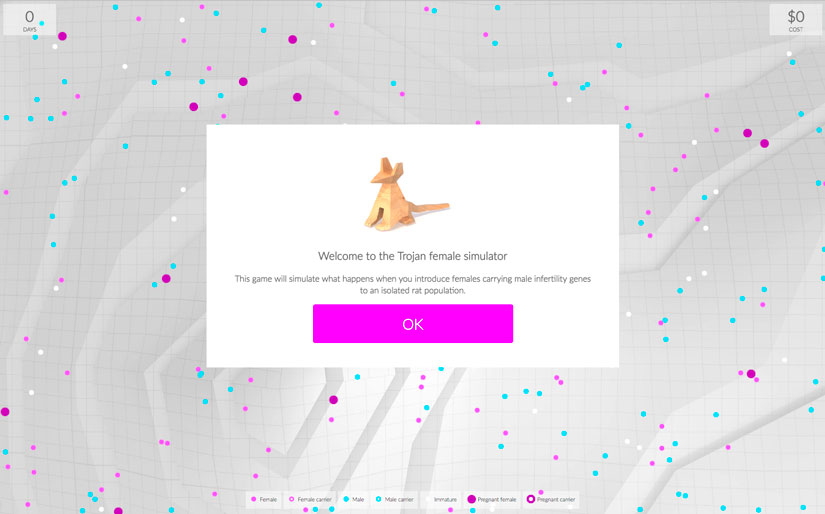 I have been fascinated with biological population control methods ever since I heard about the Sterile Insect Technique being used to control mosquitoes and limit the spread of the Zika virus. The Tojan Female Technique (TFT) is the latest angle on this and it seems like magic. I read The Trojan female technique: a novel, effective and humane approach for pest population control (2013) but I am not good enough at math to understand it. How can this work? Surely biology is smart enough to not be unbalanced so easily? I had to understand it better – so I built a simulator.

Being a trapper I already knew a fair bit about rats so I knew roughly how much they had to move around and interact. Building in logic on lifespan, gestation, litter size and range was fun but the population kept clumping together around a core of less mobile females.

My first breakthrough came when I evenly distributed (invisible) food across the screen, I then also used food to control litter size and bingo I had a stable population model. I did not even need to introduce seasons, the population surged and wained very naturally.

However I was disappointed when I started introducing Trojans. I would add a bunch and wait and they never overtook the original population. I was sure something was wrong with my model but then I tried doing regular releases (like they do in the aforementioned paper). It worked! I still don’t really understand it, I thought there would be a tipping point or something but the whole thing is very steady, and fast! In most cases I did not need to simulate a 1080 drop to exterminate the population in less than 10 years – amazing.

There seems to be a sweet spot with about 1-5 releases every 30-90 days in a population of 200 rats. That’s about 100 females added which is 50% of the initial population. Luckily they are very cheap to make.

I could make it more realistic by:

However the simulation has proven the concept to me and I am more excited about the technique than ever before. You can play with it here shaunlee.co.nz/trojans